The Board of directors and the bylaws were approved. Summary posts can be found here (2015 Individual Director Election results) and here (Bylaws amendments approved).

The voting numbers can be found here.

Congratulations to all the new and re-elected board members. Well deserved!

I have a few things I would like to add about the data that was presented – and my thoughts.

Tim received the highest number of votes. CERN is a huge OpenStack user and was showcased at the summit in Paris. He is one of only 3 the board members that are not officially affiliated with a vendor directly involved in OpenStack. I see this as a big vote of confidence by the members of the foundation – that are interested in seeing more representation from non-affiliated members. Something I personally would like to see as well.

Only just over 16% of the members voted in the election. That to me seems to be very low. and I would like to address the OpenStack community to ask why this is so? This is actually something the Board and Foundation should also be actively looking into as well (perhaps they already are).

More people actually voted for the amendment changes that in the election itself – which I find quite strange. They were already on the page and did not bother to vote for any of the candidates.

3. Operators were not chosen

Neither Jesse Proudman and Randy Bias were voted in – both seemed to me that they were very vocal in their campaign as to why they wanted to get on the board – and that was to bring a change into the way OpenStack is currently “run”. I do personally think this is pity – because I would have liked to see more representation from the Operator standpoint, something which I still feel is still lacking in the OpenStack community. 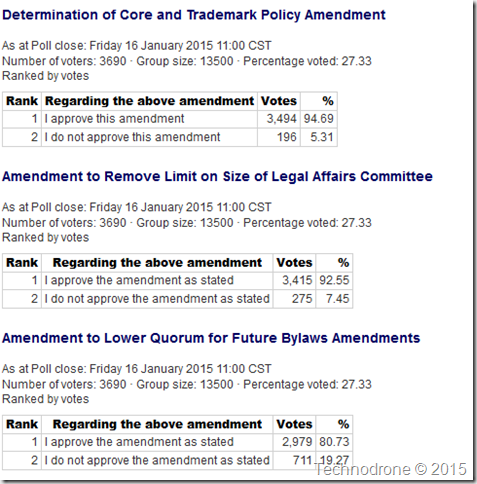 The quorum was achieved – but only by 315 votes. My previous post The OpenStack Foundation – 2015 Individual Director Election – spoke about how I see this change as a problematic one. I personally do not think that the quorum would have been reached – if it was not for the “aggressive” marketing campaign that the Foundation embarked upon in order to reach this quorum. Without the countless number of posts from Board members, Foundation members (myself included) and anyone that cared about this election - on their blogs, social media and everywhere that was possible. Jonathan Bryce even promised to remove his beard to achieve this goal..

If we hit quorum in time, @jbryce will shave his beard! If you haven't voted, vote NOW! pic.twitter.com/ys0g3Q60XS

.@jbryce's beard is gone! If you haven't voted, you have 5 MINUTES & soon we'll post the 2015 election results pic.twitter.com/ATFdOe5pQX

A huge effort indeed, from the foundation and the community at large – but my question is..

How long will it be until it is needed again?

Yes the quorum needed is now officially only 10% (instead of 25%) but I do foresee the day that even that will not be reached (and that will not be too far in the future). That is why I think the change should have been to remove the quorum all together.

5. People were not happy with the change in the quorum

On both the first two amendments, the approval rate was 93-95% – almost everyone agreed. Changing the quorum – only had 80% of the people that approved. Of course that is still a majority and perfectly valid and acceptable as a decision, but still it is interesting to see that more people were not happy with the change.

It would be interesting to know if it was the lowering of the percentage to 10% or was it that the proposed change should have been to remove the quorum altogether. I personally voted against this change because I think that the quorum should be removed completely and not lowered to 10%.

I am very pleased that the changes were made – because it allows OpenStack to continue to grow, but I do think that planning should start now – for when the changes made in these amendments will not suffice and need to be changed again.

If you are willing to share - I would be interested in hearing your thoughts about the points above. Please feel free to leave them in the comments below.