VMware announced last week the launch of VIO and there are a number of things that I think people are missing and should be pointed out.

A great part of the the functionality and flexibility that people use is the option for flexible networking, i.e. creating private networks, routers for example. 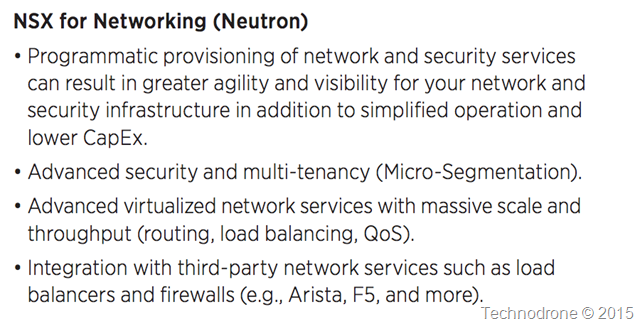 That is great – all the functionality is there – with NSX. But how many people are actually using NSX today? How many people have deployed NSX? In a previous article I went through the reasons why this will not be an easy path. So how does that work with what I currently have in my datacenter?

I think it is safe to assume that this will be deployed in an environment with a Distributed virtual switch – we are talking about environments that are using Enterprise Plus after all (and VMware is giving this away for free to everyone with the Ent+ licenses).

So how does OpenStack work with a DvSwitch today?

Well I am sorry to surprise you – but it does not. It only works with nova-network (which is supposed to be deprecated – so caveat emptor). VMware themselves have said that most customers that are using OpenStack and VMware are using NSX (and that they don’t really have much experience with nova-network).

According to a twitter conversations with @hui_kenneth and @danwendlandt last night – VIO GA will support the dvSwitch, only that information is currently not public and is only available to the Beta users. The functionality still will not bet the same as that of NSX.

So it boils down to this. The only way to really use OpenStack with vSphere today – in any kind of semi-normal way, is to do it with NSX. Any demo you have seen – Hands-on Labs, presentations all use NSX. And it always something that already exists in the environment you are working with, that is the assumption.

So VMware is giving this away for free (unless you are interested in support – which will cost you another $200 per socket) – but this essentially is giving you a hobbled product – which does not have functionality that you get out of the OpenStack box – because you are using vSphere networking.

So what features will you not be able to use – without NSX?

But of course we would like to use all the bells and whistles – actually I would really only like to use Neutron with vSphere – so my options are only going to be to use NSX (until they manage to get this working as will with a dvSwitch).

So what is this going to cost me?

This is going to hurt (and by no means am I licensing expert – and yes I know that no-one really pays list price – but here goes).

You have two options to buy NSX – per vm or per socket. Now we all know that the per-vm model – usually does not run in the customers favor – and the last time a per-vm model was proposed – the was a huge disturbance in the force. So I am going to assume that you will want a per CPU based license.

So let me lay this out in simple terms with an example.

It was brought to my attention that there is a minimum purchase of 50 CPU licenses for OpenStack support as part of the FAQ notes. 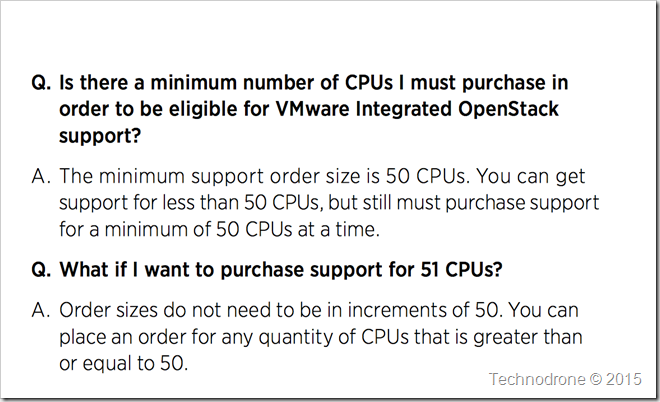 I did not change my assumption that you would only be using 4 hosts but the purchase of additional OpenStack CPU support s required.

I have therefore amended the numbers below.

If you are interested in really using (i.e. with neutron and NSX) OpenStack on a 4 host (8 socket) cluster this will cost you:

That is above and beyond the regular licensing fees that you pay for Enterprise Plus licenses (which I have not factored in here – because I am assuming that you already have them. But if you do not, then that is even more of a hit to your CAPEX.

Again I would like to stress – that this is MSRP – and not including any bundles.

VMware would like to see the whole world run on their platform (obviously), and they have started to make a move to minimize the impact that I think they are starting to feel – due to people moving over OpenStack. This offering is a foot in the door to minimize the business they could lose from people moving off of their platform (seriously speaking though vCloud is a competing product – and I do not know how much longer they can continue to sell competing products). There are a number of benefits of running on top of vSphere of course, the underlying platform – and the hooks and insight into vRO is another one of course.

That is one side of the story. The other side is NSX adoption – I do not think that VMware is seeing the market share that they were hoping to gain with NSX – network virtualization is still not a mainstream concept. Companies are starting to dabble and try – but no – we are not there yet.

The ironic thing is that even with VIO integrated with NSX when it is released – it still will not support native LBaaS, VPNaaS and FWaaS out of the box (you probably will be able to integrate with 3rd party vendors) – that will probably come in a future release.

So even with their flagship product – it still will not have all the functionality that OpenStack Operators/Users are accustomed to have in their environments today.

There are benefits of having “one neck to throttle” so to speak – but that comes with a price tag – and hefty one. It certainly is not a free product as it is being made out to be – or at a minimal cost (VMware support).

The devil is always in the details.

What do you say? Is it financially viable? Would you use VIO? Why? Or would you rather rough it and go with another vendor?

I would be happy to hear your thoughts, and comments. Please feel free to leave them in the comments below.