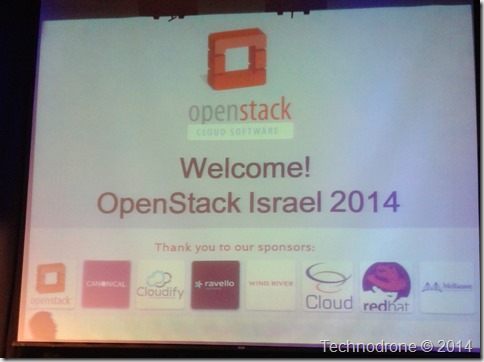 It was a great event. They were expecting 300+ people at the event, and almost 500 people were there - it was really full - but not crowded.

Slide Decks from the whole day can be found here.

The slides from my session are embedded below, and I would like to add a few words to expand on the content.

OpenStack is an amazing community - very different from the VMware one I am so acquainted with - and yet very similar in many ways.

But I will iterate what I said in my session. If you are looking for a 1 to 1 comparison between your current virtual Infrastructure - and for arguments sake - let’s say it a VMware one - you will not find a compatible solution or even an easy migration from one product to the other.

OpenStack is a cloud platform, it can be deployed on-premises (did you notice I did not fall into the semantics trap there) but it is a cloud platform. That means that will be a part of your current application infrastructure that will not run well on OpenStack - due to the nature of these applications - they were never designed for the cloud. They rely heavily on a sound and robust infrastructure below - which is something you cannot assume (or maybe should not assume) to have with OpenStack.

A few nuggets from the day - and quotes that I think are worth sharing.

Believe me it works, I tested it yesterday :) #openstackIL

The best advice so far at #openstackil from @markmc_ -JFDI (just fecking do it, in Irish)

Today @OpenStackIL .. ~500 attendees ..every year it is growing just like the #cloud #OpenStack

Thanks to the organizers for a great day - and I am looking forward already to the next event!