We are almost ready to deploy our first node but in order for that to happen - we will need the following.

Create a broker. In our case - this will be the noop broker - which means that nothing will happen after the node has been provisioned.

Before we go into how the tags are created - I would like to explain in a bit more detail, what the tags are used for.
The microkernel’s main purpose is to scan the hardware of the node, and report that inventory back to the Razor server. With that information we can create categories/profiles/flavors of nodes - and deploy a operating to that node.
Let’s take an example. You have a UCS Chassis. You want to deploy ESXi on the Blades that have 128GB of RAM, but on the UCS blades that have 64GB of RAM you don’t want ESXi, but rather RHEL6. You also have an HP Chassis with 16 blades, and there you want to deploy ESXi on all the servers.
If we were to verbally describe the tags they would be as follows.

For our example we will be creating a test rule and it’s appropriate tag. The tag definitions will be: 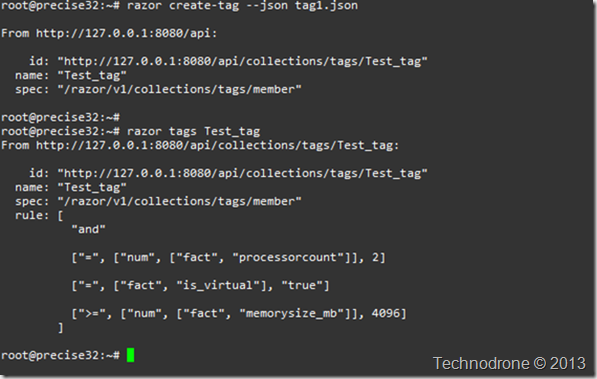 The text above is piped to the policy.json file.

Let’s go into a bit more detail into each of the lines of this policy.

broker - Which broker should be used to continue the configuration, in our case the noop broker - which means nothing will happen.
enabled - True or false - you can create a policy and not have it active - if you choose.
hostname - The pattern that will be used to name your nodes. host${id}.maishsk.local (id is the number that was allocated to the node) - the rest you can customize as you please.
root_password - The root password that will be configured on the node.
max_count - The number of times the policy should be applied.
rule_number - This allows you to prioritize your policies. Lower number wins
tag - The tag that the node will be matched against. 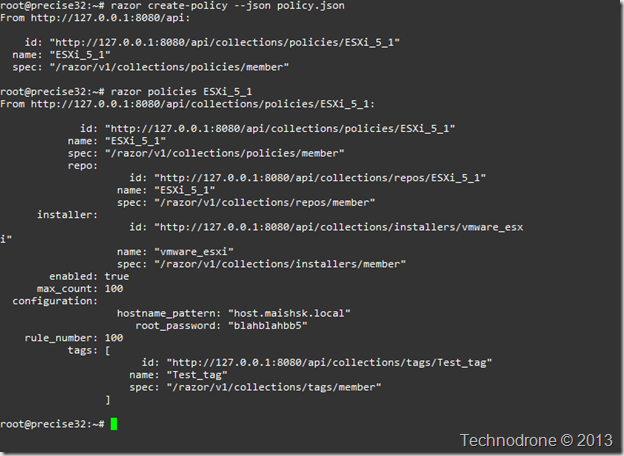 The steps above were split into two stages, but there is also a possibility of creating the tag and the policy in the step, all you will need to do is define the rule in the policy.json - when the tag is declared.
Instead of this line

The difference in the syntax above is that we defined the rule of the tag - during the creation of the policy.
That was a lot of information to digest in this post, so I hope you were able to get it all in.
In the next post - we will go into a little more detail about the installers and their configuration.