So the onslaught of “vote for my sessions” has begun.

I like numbers and the interesting information that can be interpreted from those numbers.

VMworld Call for Papers Voting is no exception. 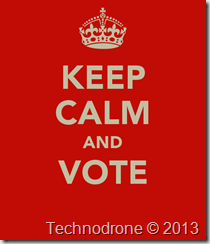 But before that, I would like to stress something. These numbers are what I have extracted from what is publicly available - it could be that the numbers presented below do not make up a full picture (they probably don’t) - because there are sessions that could already have been accepted and we know nothing about it.
My thoughts only…

My thoughts - either there were less submissions this year, or VMware weeded out more stuff before the voting started this year, or there are many other sessions that have content relating to upcoming features that they were not publicized in the voting process. In any event - it is still impossible to go through a list of ~1000 sessions.

To which company do the potential speakers belong?  (and here I took only the Diamond sponsors) 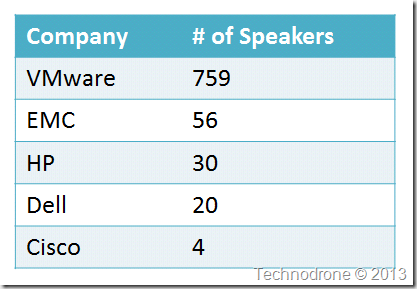 My thoughts - very much expected - although I would have expected that Cisco would have put in more sessions (let the conspiracy theories begin..) 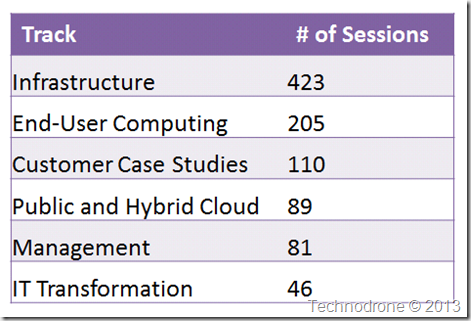 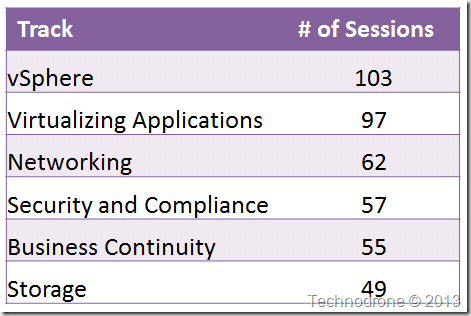 Some other interesting little tidbits.. 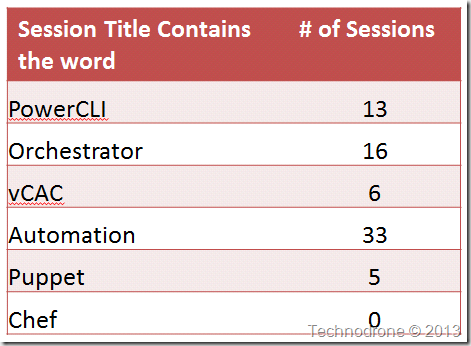 **My thoughts - Automation has become a major concern as environments are growing bigger and more complex - you can see that from the numbers above.

Orchestrator - is at least on par if not starting to overtake PowerCLI as the preferred tool for automating - that is why there are so many sessions.
Puppet is still the tool of choice for most VMware professionals - strange though that Chef did not even submit anything - is this the direction for the future - maybe??
And of course vCAC, the new kid on the block - will have to prove itself. 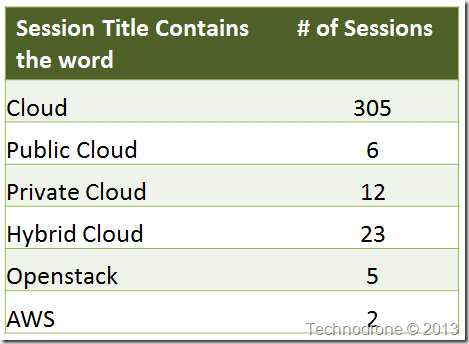 **My thoughts - Cloud cloud … cloud cloud cloud!! One of the terms that will be used too much at VMworld. But hey… it’s VMworld people!!

Hybrid is definitely popular - and that also could be because that is what VMware has named their Public cloud offering. Are you confused yet???
Openstack - is something that VMware are trying to embrace - but is quite a different animal than what VMware is trying to sell as their management layer - it will be interesting to see how this evolves, still to early to say if you ask me.

And the AWS sessions - will be not be Amazon friendly.. 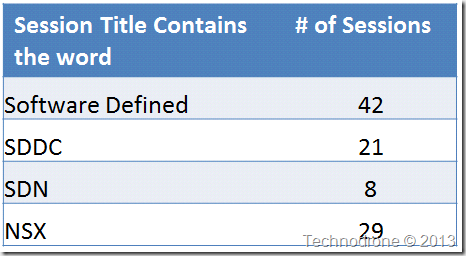 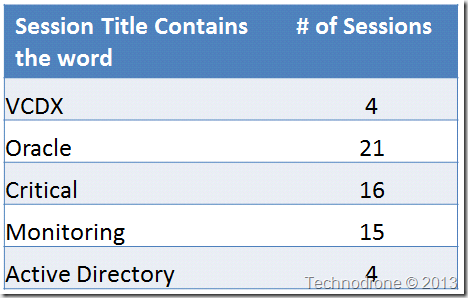 My thoughts - Oracle and business critical applications - VMware are continuing to put the emphasis on how well these work on vSphere, an interesting fact though is that most of the presenters for the Business Critical Apps are not VMware people they are customers - which shows it is working and being used.
I would have expected more monitoring/vCOPS sessions.
Maybe finally there will be something new in the Active Directory sessions with the new virtualization features for domain controllers in Windows 2012 - because if not this topic has already been beaten to death….

I would say go out vote (and if you really want, I have a 3 sessions that you can click on) but I am skeptic about how much, if any influence your vote will actually have on which sessions will get in.

Influence how? By how much? As long as the process is not transparent - then we will never know.

As a wise man once said … “We are all influentials ! "