I did not want to reboot the host, seriously… just because there was one VM that would not power on?

What I did not tell you was that a few hours before there was a power failure that took out the Fiber Channel switches (yeah… you always find out that someone plugged something into the wrong power strip after things like this) which in turn caused the all the ESX Hosts in the cluster to lose the LUNs and HA tried to failover the machines.

This I saw in the logs of the VM.

As you can see the machine tried to failover to another host, but was not successful because the other hosts also had not access to the LUN.

I could not clone the VM. I could not remove the VM from the inventory either.

Did you notice that the machine was no longer on esxdmz2 (where it originally was located before the power failure)?

I confirmed this within the Events of the VM. the machine had been moved and changes were made on the new host.

I figured I would try to power it back up on the original host esxdm2. 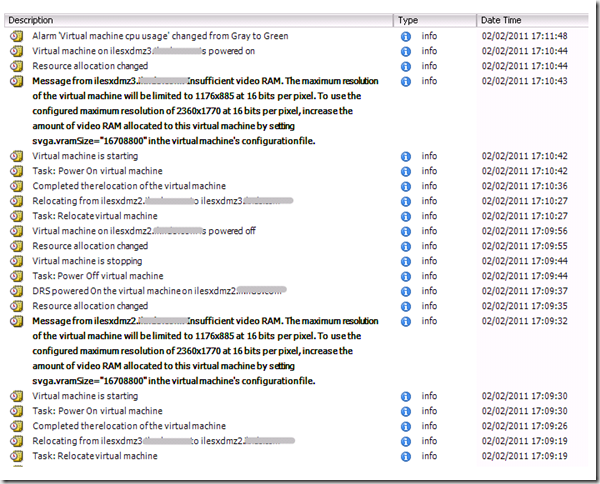 That worked! I then moved it back esxdmz3 and powered it on on and as you can see the machine powered on with out an issue.