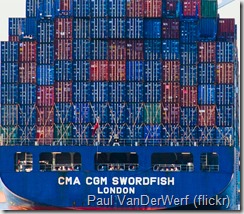 Containers are not only those things are used for shipping stuff around – or storing the things you will never use or you don’t want to spoil – they are also used (and if you ask me – might even replace virtual machines in the not to distant future) as a platform to run applications / services / stacks.

Docker is an open-source engine that automates the deployment of any application as a lightweight, portable, self-sufficient container that will run virtually anywhere.

Docker containers can encapsulate any payload, and will run consistently on and between virtually any server. The same container that a developer builds and tests on a laptop will run at scale, in production*, on VMs, bare-metal servers, OpenStack clusters, public instances, or combinations of the above.

Common use cases for Docker include:

A quick introduction presentation to docker is embedded below

I wanted to share with you a quick and easy way to start looking at docker and what you can do with it. And the most basic part of it is installing and configuring docker.

If you are just looking to play with it – you could install a VM with Ubuntu or and go through the motions of installation on your platform of choice.

But I would like to get you up and running as fast as can be.

boot2docker is a lightweight Linux distribution based on Tiny Core Linux made specifically to run Docker containers. It runs completely from RAM, weighs ~24MB and boots in ~5s.

And to make it even easier Mitchell Hashimoto (the author of Vagrant) has created a vagrant box so you start it up in even less time.

I can understand why this is going to take off – and why containers will have a good use case for a number of reasons and applications.

It is unbelievably fast!!

It takes less than a second – microseconds even, to start a container (i.e. a VM/OS/instance)

I have a base ubuntu image and I ran a simple test:

At the same time I followed the docker log.

Are you ready to try out docker?

And of course this is a simple demonstration – you can get much more creative than this!