Yesterday I read an article titled Martin Casado on VMware’s 2014 Roadmap, the Competition, and SDN and the part on which I would like elaborate is the following

On the tactical level, meanwhile, Casado said that VMware’s biggest market hurdle isn’t any particular competitor or technology,
but rather “the traditional way of doing things” in IT. “Inertia in IT is surprisingly strong,” he said. To overcome it, VMware and their ilk must convince enterprises that if they adopt network virtualization, it will not simply be just as secure as the traditional model, but even more secure; not just as easy to manage, but in fact easier.

“We need to convince people that flying is safer than driving,” he said. 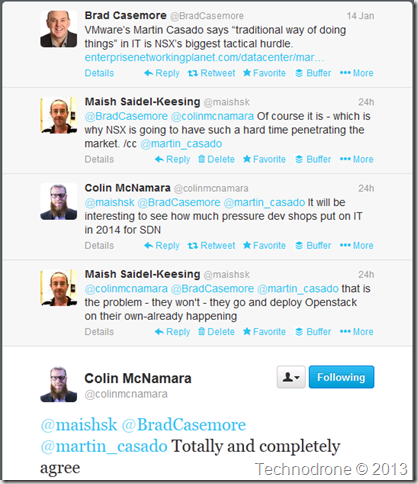 Of course IT is the biggest obstacle to adopting SDN.

It was the same when server virtualization started out. Remember this slide? 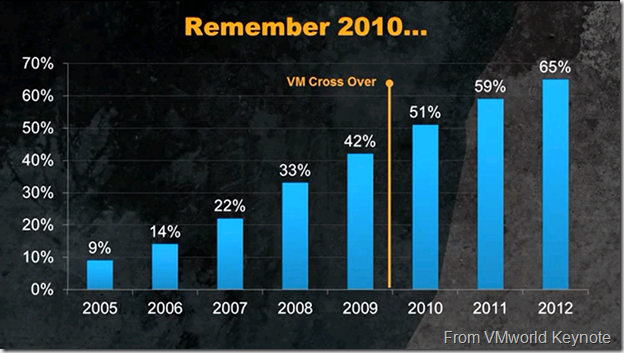 It took 5 years (yep 5 long years) for virtualization to become default platform on which we deploy workloads, and this is of course is growing…

Why did it take five years? well there is a number of reasons for that and to name a few, product maturity, trust and of course “the traditional way of doing things” in IT. You have to learn to trust the technology, understand it, build a proper ecosystem around it - and educate, educate, educate!!

So VMware - with NSX and Cisco with ACI are in for a long haul. SDN is the natural and logical evolution in the ever growing and changing technology landscape.

It will take time, I sincerely hope it does not take the same 5 years. Until that new evolution occurs, organizations change and the technology becomes well adopted and trusted, until then SDN will have a very long climb, up a very, very steep cliff.

It is not uncommon that the development part of the organization is the one that leads the way technology and their demands/requirements from IT.

They do not have the patience/time/tolerance to wait for IT to provide the resources they need. That is how Rogue IT came about.

The last time I saw someone bring up a DHCP server on the corporate network - it lit up so many red lights in the helpdesk that you might have thought it was a certain place in Amsterdam.

There are limitations (rightfully so or not, that is the question) on what you can do in the corporate network. You cannot do what you would like. Of course this brings a number of limitations to what your developers are trying to accomplish. And a good amount of these things they can get with a public cloud provider today, all they need a small piece of plastic.

A good amount of NSX is going to provide already exists in Openstack, and all in software. Routers, DHCP servers, load balancers, firewalls - it is all there, built-in.

One of the observations I had in the Openstack Israel 2013 conference - is that the adoption of Openstack is being led by developers, and IT is trying to play catch-up. 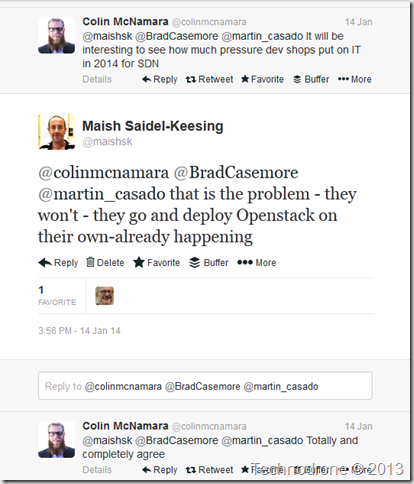 Developers will not wait for IT to implement an SDN solution - they will go out and do it on their own.

Please feel free to leave your thoughts and comments below.

P.S. Flying is statistically safer than driving - but only a few of us know how to fly a plane and even fewer own one.

Almost everyone owns and drives a car.