VMworld has come and gone. A whirlwind of a week.

I only was in the US for 4 days, and in transit for another two, and it was worth every single second and cent.

I would like to thank Amy Lewis for her assistance in getting me to VMworld as part of the Social Media effort for Cisco.

Now to the show and my highlights and thoughts.

Social networking is a major part of the conference. I met more than one person who told me that they did not even sign up for the sessions. They came to meet customers, speak with vendors, and use the power of social networking that is in full force.

The blogger lounge was a great place to be. As I said in my Ultimate Bloggers Guide to VMworld post I did not go into the General Session Hall, I sat at the blogger tables.

I do think that the location of the blogger lounge this year was just as good as last year’s with one major exception. There was not single video screen that could be seen from the blogger’s tables. Something that I do not understand how no-one noticed when they planned the layout of the Hangspace. I hope that it is something that will be corrected for next year.

The atmosphere at the show provides you with an energy, it is hard to define. I feel it brings out the best in me, making me want to continue what I do, contribute ever more to the community, because you see how vibrant and great this community really is.

I know that there are people do not like San Francisco, I personally will never get used to the number of homeless people roaming the street (not that I have anything against them - just not something I am used to seeing where I come from). I find the location great. Not overcrowded, and for me the option of getting outside and getting a fresh breath of air and some sunshine a few times a day, beats Las Vegas every time!

The food halls were set up much better this time and you had a place to park yourself at a table and chair and eat as a normal person, contrary to last year.

I cannot comment on the regular food, but the kosher food was much better this year (they switched caterers) although I found the portions extremely small.

Drinks and snacks throughout the conference were perfect.

So busy!! So much to see!! I made a point of walking the entire floor at least twice.  There were several vendors that provided some nice vEXPERT swag

Tintri - with the vExpert Shirts 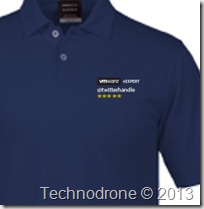 Nutanix - with the vExpert Pint glasses 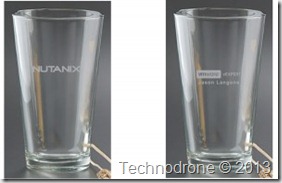 Simplivity - with the vExpert Raspberry Pi

I did notice that some of the vendors were getting outride rude and “stealing” peoples badges for a scan, I personally pulled my badge away at least once from someone who tried to scan it without asking permission.

And I mean what I said here in the tweet above. There are people who are interested in your products, not the silly t-shirts or pens you are giving away. Your job as a vendor and a marketing person is to identify which person is there for the SWAG and who is there for your product - and how to get your message across effectively.

There are several vendors and solutions that I plan to get more detailed information about their offerings. You can expect some blog posts in the future.

I have been to the VCDX sessions given last year by John Arrasid, I have gone over the bootcamp that was held on the vBrownbag Bootcamp sessions, but I have not done this in person. Many a VCDX candidate has stated, that this bootcamp was a great help in helping them to get past their defense. This is something I have tried to join last year, but it did not work out.

Unfortunately, due to personal reasons, I will not be able to complete my submission in time for the last opportunity to defend this year in Singapore, but I will be aiming for the (most probably) upcoming dates during PEX in 2014 (submissions are due before the holidays in December (official dates to be announced).

The session was extremely useful, not that there was a huge amount of information that was new to me, but what I really enjoyed, was the questions that were raised (and answered), the feedback from the VCDX’s that were there. There was a substantial number of them. And most importantly - hearing the thoughts of other candidates, and how they tackle a design decision provides much food for thought.

There were some familiar faces, some I have not seen, and some I came to have a number of discussions during the show.

All in all a great experience, and highly recommended!

I did not attend that many frontal sessions, there were several that I did, and I must say that all of them were excellent. It could be I know how to choose them, but I think it was because of the level of the presenters.

If the only sessions you attend at VMworld are the Group discussions - it will be the best thing you do. All at Moscone West #vmworld

That was 100% true. A great number of the group discussions were booked solid. I noticed though that they were not full. Never. In light of that I decided I would gate crash the remaining Group Discussions that I could not register for.

I think I joined 5/6 of these group discussions. All of them were great. Also personal. All with SME’s. All small groups of people who know what they are talking about.

A few comments to the VMworld crew though.

vSphere 5.5 and vCloud 5.5 was announced. I think that Chris Wahl did an amazing job of providing a series of all a good majority of the Improvements in vSphere 5.5. Go and read his posts. Not to say that the others did not have good in depth articles, there is a huge amount of information out there regarding the releases.

My RSS feed sort of exploded during VMworld (usually I have 20-30 a day), it jumped to 4 times that amount after the opening keynote, and went up to over 300 by the end of the conference.

NSX was a major point at the conference, huge! Also the highly visible lack of Cisco being part of the solution - also a point that generated lots of discussion. This is something that I will have to expand on in a future post.

vCloud Director seems to be going away. VMware splits vCloud Director into vCenter, vCloud Automation Center. I heard this first hand from a well known VMware employee during a conversation I had with him at the show. So the rumors are true, and I assume we will hear more from VMware on their direction in the near future.

Again an amazing job by the whole crew! I don’t want to put any names here because I am afraid I will forget someone.

It was a damn shame that the vBrownbags were pushed all the way into a tiny area in the back of the hangspace. It seems that the space was only allocated for video recording - but no place for people to actually come and listen live. It was also far to loud to hear anything unless you were hooked onto a microphone directly into the feed.

I have no idea why this was done, and I sincerely hope that lessons are learned - and this can be corrected for Barcelona and next year!

Well done! You make our job a lot easier.. 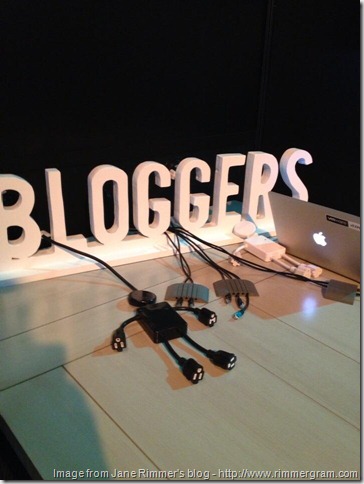 The only complaint I have was that the chairs were really uncomfortable….

VMunderground!! I need say no more..

Sitting next to @maishsk in the #VMworld Hang Space - this was us last night at #vmunderground. Good times! pic.twitter.com/INNREfeGES

vBacon - a picture is better than a thousand words (even though it still is not kosher..) 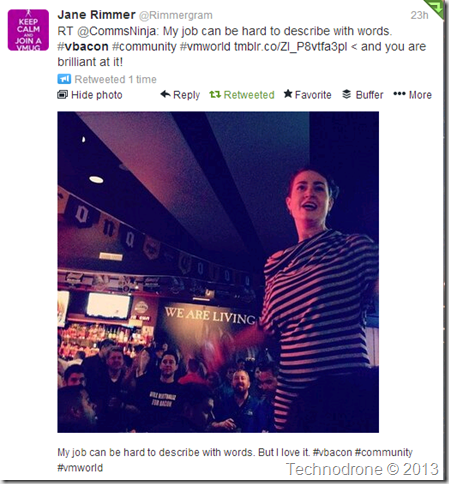 Tomorrow is the beginning of the new Jewish year - Rosh Hashanah. A time for me to reflect what has been this past year, what will happen in the next, and how to make it even better.

VMworld was definitely one the highlights of my year!

Hope to see you all again next year at VMworld 2014.