The Twitterverse exploded this morning with @ericsiebert’s announcement:

Shortly thereafter started the flood of posts announcing the vote. Over 20 in the last past 12 hours.

Self promotion is a good thing – to an extent.

I have my opinions about the whole process, I have voiced them before publicly on Twitter and also on my blog as well. Here is a post I wrote about this last year - ‘Tis the Season to be Voting …..

During the last year or so I have seen people start blogging or try and “arrange” for themselves positions within the community (becoming a VMTN moderator as a springboard to become a vExpert is such an example) for all the wrong reasons.

To put it in the words of others – who have said it better than me.

Thanks to Rynardt Spies, Christian Mohn and Ricky El-Qasem for sparking this post. 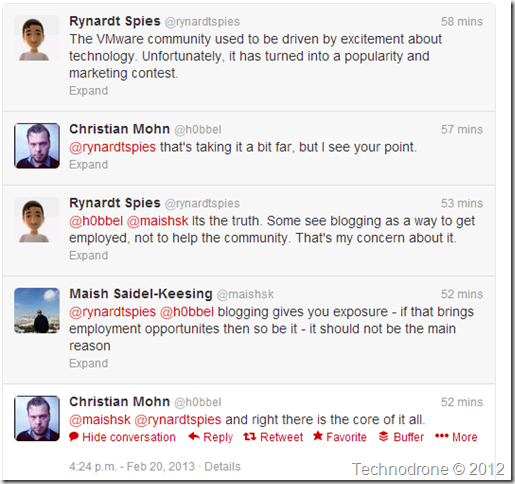 Vote for whoever you want – but do it for the right reasons!!

One more thing – thank you Eric for all the hard work you put into this!!