The original levels were as follows: 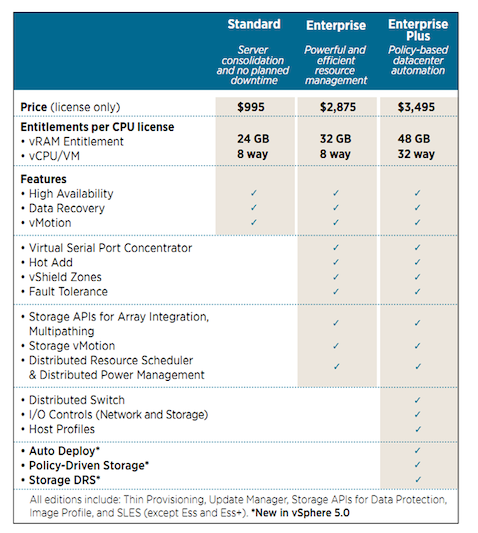 As I mentioned on a previous post of mine vSphere 5 Licensing is (some kind of) per-VM licensing - VMware took a huge amount of flack from this. People were very verbal - very blunt and on the competition’s side very, very pleased. The thread below has been extremely busy since the announcement, reminds me of the good old days..

Then came along Gabrie’s post and another from Derek Seaman

And these are the new entitlements

In my previous post on Licensing I explained where this would really hit people hard.

So how does this change help the Essentials customers with a the raise from 24 -> 32GB Ram per Socket?

In essence - not that much. The extra addition of 16GB of RAM will not help those who have already gone beyond the 64GB ram. But to tell you honestly - if you are already packing your server with amounts of RAM above that - then you should not be using the Essentials bundles - from a business perspective, the amount of VM’s (or the kind of critical VM’s - i.e. High resource VM’s) on such high capacity servers, should have much stronger features backing them which are only possible to get in the Enterprise and up editions.

And what about high density servers? well here there is a different story. Those with such big servers will usually purchase the high-end licenses. And in this case the potential damage caused by the previous levels has been alleviated. Most 2 socket ESX hosts I know are under 192 GB of RAM - so they should be ok. and the same with 4 socket servers - under 384 GB RAM.

I would like to stress on more time - these levels are not installed RAM but currently, powered on VM’s allocated RAM

One more loud complaint was the free vSphere Hypervisor that was limited to 8GB vRAM.

Raising the limit to 32GB of RAM was the right thing to do. A small note, the physical limit is still in effect - no  more that 32GB of Physical RAM per vSphere Hypervisor.

My take on the change (and this is my personal opinion only).

This was either something planned from the start. The move to a vRAM model is the right thing. The entitlements were set low - on purpose - to generate the discussion - and get people looking at how / what their environments are using. After the idea had seeped through into our conscience then give the extra “present” of double entitlements - which covers I think more than 80% of the deployments out there - and gives the client the feeling of a win-win situation for both sides. Most people that have checked their current environments have come back with the answers that they would not need more licenses (and that was before today’s announcement).

It also could have been a money grab attempt as has been said publicly more than once. But since the amount of loud feedback received caused some big-wigs in VMware to panic - and scramble with a more realistic solution that would not cause such an uproar.

If you ask me - the second option is not logical - I do give a company of VMware’s size and market share a bit more credit.

Still - this did cause a lot of negative publicity, but more importantly it did something else. It took away the spotlight from all the great and upcoming features and improvements in the new release. And now that the biggest obstacle has been removed - VMware (and the virtualization community) can focus on the important stuff.

Just in time for VMworld!!

A last note regarding some things not well known about vRAM.

vRAM entitlement - includes all the vApps - and mgmt products in use for example vMA, CapacityIQ, vCenter. These are counted  towards your vRAM entitlement. This is something that was raised to VMware to see how these could be removed and perhaps will be solved in a future version.

The maximum amount of memory that will be counted for a single VM is 96GB. That means the Monster VM is on! 1TB of vRAM will still only be counted as 96GB.

This can only be on a per-region basis. That means if you have a vCenter in the US and another in Europe - you cannot use both of these vCenters to as a vRAM pool. This is due to pricing differences between the different regions.