A small group of people were granted access to the Release Candidate Beta and over the past 3 weeks have been exposed to the new features and improvements that are involved with this new release. I was one of this group.

There are going to be an abundance of posts flying fast over the next few days, with a huge amount of information.One of the purposes of the program, was to spread the word and expose the new features that are available with the new release.

First some marketing material. Several technical posts with more details will follow over the next few days. 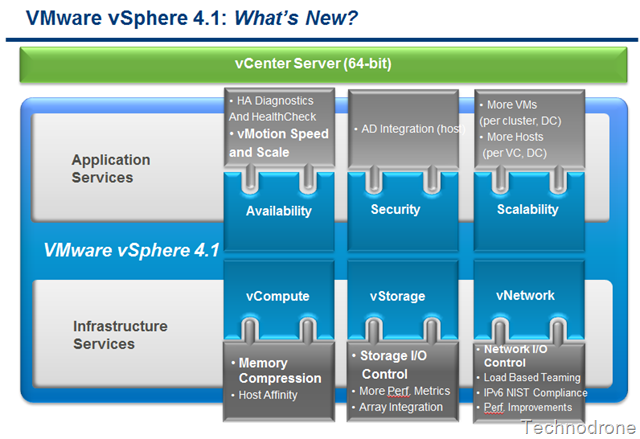 Leveraging more than a decade of industry-leading technology, VMware vSphere™ sets a new standard as the most robust and reliable virtualization platform, and now forms the best foundation
for building cloud infrastructures. VMware vSphere is used in over 170,000 deployments in companies of all sizes throughout the world. The latest release of VMware vSphere (version 4.1) pushes the platform even further by:

The major new and enhanced features that vSphere 4.1 delivers are listed below and grouped by the major benefits of the platform:

Efficiency through utilization and automation
Agility with control
Freedom of choice

The sections below outline each of these benefits in greater detail.

Efficiency through Utilization and Automation

*All scale numbers above show the new 4.1 metric, as well as the increase from the vSphere 4.0 release (4.0 numbers are above in the same pillar).

vSphere 4.1 extends its award-winning availability and security capabilities with the world’s fastest live migrations and the ability to respond in parallel to any business need or change. Application services enhancements deliver new status details for high availability and tighter integration with an existing directory service.

For a complete and detailed list of new features and capabilities in VMware vSphere 4.1, visit https://www.vmware.com/go/vsphere