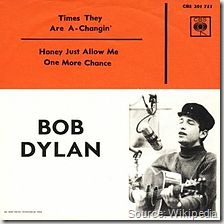 Times they are A-changin’, Bob Dylan’s song from 1963 was written at the time to make a change.

On Friday I caught wind of a story which I think should actually be an eye opener for us all.

The story I am talking about is the one about Adria Richards and her tweet at Pycon.

Amanda Blum posted a long but good post Adria Richards, PyCon, and How We All Lost with her take on the whole thing.

To make a long story short. Adria heard a sexist remark while at a conference from to guys sitting behind her. She snapped a photo and posted it to Twitter. And all hell broke loose.

One of the men was fired, her company was attacked and she was fired.

Firstly I do have my own opinion about how society has evolved over the years and how morals have continuously deteriorated generation by generation. But that is not what I want to talk about. Who was wrong here? Well both sides were.

Who was more wrong - doesn’t matter.

Amy Lewis wrote a post a while back - Don’t Call Me, Maybe? (Go ahead and read it, I will wait) about how people are using social media more and more, instead of actually interacting with each other - and by interaction - I mean talking with someone on the phone or even better, face to face.

People do not talk any more. And it is a shame.

Technology has enabled us to do a great number of things, an unbelievable amount of things.

In my post Where Does it All Come From? I touched on how things have evolved in the way use technology. I have the option to reach out with my keyboard and contact someone on the other side of the world and get an answer almost instantaneously. Once upon a time we had to send a letter - wait for 3 weeks for it to arrive, and wait for another 3 weeks until we received a reply. Technology is a wonderful thing.

But it has its downsides as well.

I know I do it, I think we all do. The reasons are obvious, we all know them and have been written and discussed so many times, over and over again.

Dear fat guy next to me, If you’re so big you need two arm rests, then I demand the right to use you as a pillow.

Dear guy in the window seat next to me: IF YOU HAVE A SMALL BLADDER ON A 5-HOUR FLIGHT, BUY A DIFFERENT SEAT AND STOP GETTING REFILLS.

There are hundreds and thousands of examples like the ones above (I do not follow either of the above people on Twitter, there tweets came up randomly), I am actually sure that each and every one of us has probably posted something like this.

The question I would like to ask is why we are willing to put something like that up on Twitter for the whole world to see..

But people are never willing to say something like that, out loud, to a person’s face!!

It took me a while to learn this and of course I learned it the hard way, but the best way to talk about something you dislike, is to voice your opinions, make sure you will be heard.

The lack of proper communication is one of the biggest problems (I think) we have as a society today. People are afraid to say what they think - OUT LOUD, they are willing to post it on Twitter, or Facebook, because they feel “protected”, “safe”, “secure” behind a technological medium which will shield them. But not everything has to be public, shared with the world. The things I see people post sometimes on public forums really makes you wonder…

Going back to the incident at Pycon, if she had turned around and told the guy to shut up and stop making those offensive remarks, then:

Sometimes that “protected/shielded” place is not really that safe as you think - and could possibly cause a lot more damage than good.

It not by chance that almost everyone you ask says that the best part of going to a conference like VMworld, is the fact that you meet the people you are in contact with on a regular basis, and you can get to know them - in person. The personal contact is what makes the difference, and builds those long lasting relationships.

Perhaps it is the culture I come from, but we are not afraid to voice our opinions, not afraid to say what we have on our mind (and that can sometimes be seen as being rude, uncivilized or coarse), I know it is not like all over the world, and I feel that is a shame.

Perhaps this is a utopian wish, and I know that it is not suitable for all cultures and all situations, but I do hope that if we do communicate more (and not through Twitter/IM/Facebook etc.), voice our thoughts - directly - to the person that needs to hear them, then we will be able to understand and respect each other much more.

As was said in the post above we all lost, and we will continue to lose unless something changes.

Please feel free to leave your comments and thoughts in below.