At VMworld 2012, at the vExpert briefing - we were introduced to an upcoming social idea that VMware were working on - Cloud Cred.

Today I received an email from the VMUG organization (screenshot below) 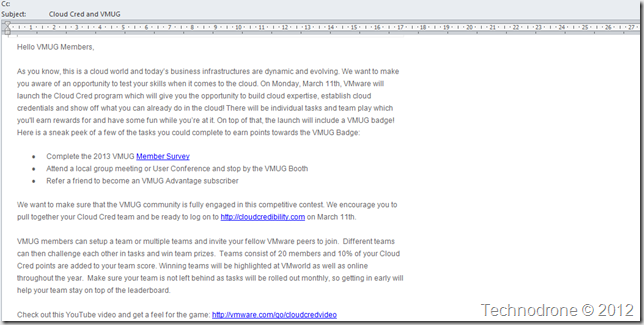 Currently the site is not yet available (according to the mail above - it will be on March 11th) - as you can see from the screenshot below.

So what is Cloud Cred - I will leave this to VMware to explain..

An Overview and Demo is also available here.

If I remember correctly the whole idea was not received very well at the briefing.

Making the whole thing into a “game” where you are receiving points, and can get “stuff” for getting the highest scores and even “win” the grand prize of a trip for 2 to VMworld Barcelona - seems to diminish a good amount of what all the VMware evangelists, bloggers, vExperts do. We are not doing it for the points or trinkets, but because we believe in what we do.

I think the commoditization of the blogging and evangelizing - will only reduce its value. Time will tell.

What do you think?