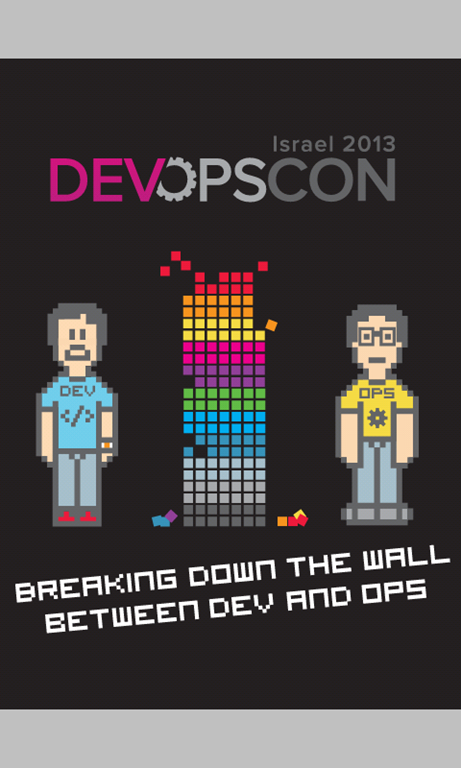 Today I attended the DevOpsCon 2013 in Hertzliya, Israel. As you can see from the agenda there was an abundance of great sessions and I thoroughly enjoyed myself.

This was not like most of the one-day seminars I usually go to – it was focused 100% on DevOps – and virtualization was just a (very small) by-product – seeing that it was only the underlying infrastructure.

The speakers were very good (almost all of them), the content was very interesting and very though provoking. The food was fine, venue was pretty much ok (albeit a bit crowded).

I had a really good time, it was great to see the interactions on Twitter and the feedback that was given during the sessions (even though I expected a lot more – it seems that Israel is not that big on Twitter).

I will be going into depth with my thoughts on some of the sessions in future blog posts but here are 8 little gems (of many) that came out of the day.

I really appreciate the feedback!

@maishsk no thank YOU for the tweeting & sharing, you helped make it awesome. PLUS we thoroughly enjoyed your sense of humor :-) #devopscon

I will post a link to the slide decks when they become available.

Updated: The slide decks are coming in.

One Does Not Simply Walk Into Devops from Uri Cohen

Continuous delivery at SAP IT for devopscon Israel from Alon Aizenberg

We tried to build a DevOps Team and all we got was this lousy t-shirt, Clive Foley from DevopsCon

Continuous Delivery at Wix, Yaniv Even Haim from DevopsCon

How we took our server side application to the cloud and liked what we got, Baruch Sadogursky

How I Learned to Relax and Love the Logs, Avishai Ish-Shalom

Continuous Delivery at SAP IT, Alon Aizenberg from DevopsCon

Vagrant and Puppet, your Ops Sketching Board, Ronen Narkis

Taking a SaaS Shop from No Ops to NoOps, Pavel Suchman from DevopsCon