I was entrusted with the deployment of a new HP DL380 G7 as a new ESX Host.

I have my build process down very well. I use the UDA:

All fine and dandy. So.. I prepared to do the same with the new G7.

I booted the server and started the process. And BAM! it failed - complaining that is could not find the disks. I was intrigued to say the least because this is a proven working process - which never, ever fails!

As always - I use Google as part of my right-brain - and this brought me to the following post that shed some light on the issue.

During the kickstart operation you define where you are going to install your partitions.
Historically this was /dev/cciss/c0d0 as you can see from part of the kickstart configuration below

If once upon a time it was

Ken Cline also pointed me in right direction. With this new adapter the devices are now recognized as /dev/sda and not /dev/cciss/c0d0.

Well all in all this is a good change - I think. If you were using different Vendors IBM, Dell, HP you needed to keep one template for HP and another for all the rest.

Even the UDA specifically was built this way 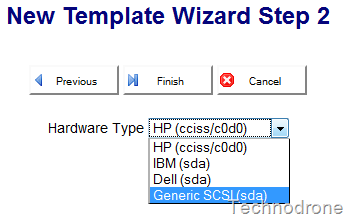 Judging from the post mentioned above this is not only a G7 issue but also a G6 blades as well.

Hope you can make use of the info.